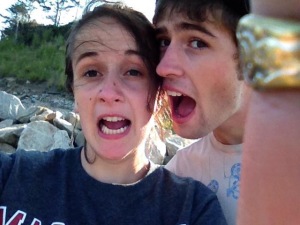 I decided my freshman year of high school that I wanted to take a gap year. Unlike many of my long term decisions, this one stuck. My reasons for wanting to take a gap year changed through high school, but by the end of my senior, I really just wanted a break. I spent a considerable amount of my senior year agonizing over what to do during my gap year. Ultimately, I decided to spend 6 months as an au pair for a family of six in Florence, Italy. It was the perfect situation: I’d take care of the kids in the mornings and evenings, leaving the main part of the day free for me to explore the city. I was excited to be submerged in a culture so different from the one I know. I liked the family and the pay was decent for an au pair job. However, through the process of wrangling an impossible budget, trying to contact the elusive Italian consulate, and finding all the pieces for a visa, I was losing confidence in my plan. Many of the obstacles were solvable, but when I found out about the financial requirement for a visa, I had to admit defeat. I had already requested a deferral from the school I committed to, I had a plane ticket purchased, and I suddenly had no idea how to spend the next year. Thus, the birth of the epic bike tour. Haegan and I were already planning a month long trip around Europe when my 6 months were finished in Florence. I decided that I would spend part of my gap year working and the other part traveling around Europe. Thankfully, this idea didn’t sound too bad to Haegan and eventually he even managed to convince me to lengthen the trip from three months to five. I am intimidated by this trip. I am not a strong cyclist right now and because we are completely funding this trip ourselves, money is going to be tight. More than intimated though, I am beyond excited. Every time I tell someone about the trip I am taking I cannot help but smile. We are going to see so many amazing places, eat all kinds of incredible food, and meet intriguing people with experiences totally unlike our own.

For now though, I’m trying out Haegan’s new training regime (I’m his coaching guinea pig), working long weeks, and Haegan and I are daydreaming about all  the places we want to see.

For a while people have been asking what I am doing after high school. I never really had a definite answer. “Traveling” I’d reply, vaguely. I had plenty of ideas, but no plans. For a long time I’ve imagined a trip like this but I was never very confident that it would happen. It just seemed like too much to pull off on my own. Too long to spend by myself. Travel is best experienced when there are people to share the memories with. When Autumns plans for au pairing fell through, and we had been talking about spending a few weeks riding bike around Europe, it seemed like a great opportunity. Slowly over the next few months I convinced her to up the length. First 4 weeks. then 2 months until all of the sudden we were planning a 5 month, 5000 mile tour through 19 countries. All with someone who just started riding a bike. It’s going to be an adventure for sure.

Since I started riding 5 years ago I immediately fell in love. To me, there is nothing that compares to riding a bike, whether its for sport or transportation the freedom of riding a bike is unbeatable. As a mode of travel you gain a whole new perspective and the act of travel itself, getting from point to point, becomes a part of what makes the trip memorable. You can smell the air, feel the sun and experience the landscape and still get around in a way that is totally unique.
I still can’t really believe that this is happening but it really looks like we are going to be able to make it happen. There’s still a lot of planning to do and things to figure out but knowing that it’s possible is all I need. I’m amazingly excited for this trip. More than I have been about anything in a long time. Travel, bikes, adventure, what’s not to love?

One thought on “An Introduction”