Yesterday we got back from our first real loaded trip. We packed up all our gear that we’ll have for the next 5 months and rode 60 miles out to Hard Labor Creek State Park. (Autumn would like to add that it was indeed hard labor.) The first day went pretty well. After a little bit of panic in the morning of thinking we wouldn’t able to fit everything, we got everything packed up and hit the road by 11 am.

It was pretty cold at the start but once we got going the temperature was okay. As usual, the roads getting out of the city were busy, and made for less than ideal riding, but eventually the roads mellowed out and became a lot more scenic. 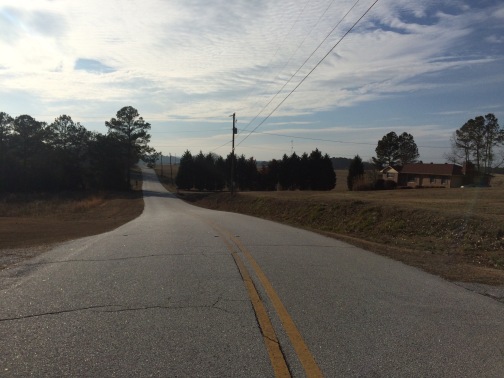 With our late start and lower than anticipated speeds due to how much weight we had on the bikes, we arrived a bit after dark and had just enough time to get everything set up before the rain began.

The campsite was nice and very empty (I guess we’re the only ones dumb enough to go camping in late February with a forecast for rain the next day). We settled in and fell asleep to the sound of rain on the tent.

When we woke up it was wet and cold outside. It had rained all night but we were nice and dry in the tent. We broke camp and headed out. It was not raining hard, almost more of a heavy mist than rain but at 33 degrees on a bike you get cold pretty fast and within the first half hour, even with thick gloves, our hands were frozen. We had to stop somewhere to thaw out. 10 miles in we reached Social Circle and stopped to get coffee and warm up a little, unsure of how we could possibly deal with the current conditions all the way home. We texted my mom to see about meeting her in Lithonia, another 30 miles from Social Circle so as to save ourselves at least one hour of suffering. After all, 60 miles is well more than we are planning on riding on a typical day of our trip, especially with the weather we were riding in. We sat at Buckeyes restaurant for at least 30 or 40 minutes drinking coffee and eating johnny cakes  until we could feel our hands again and then headed out. It was immediately better, as if that stop was all we needed. The small town hospitality and slightly warmer temperatures turned our whole day around.

A bit after we left my mom called saying she was on her way to meet us, which we weren’t expecting at the time. She thought with the bad weather that was rolling in and the fact that we leave in 8 days, it wasn’t worth risking getting sick riding in the cold. So we only ended up riding about 22 miles total before getting picked up in Covington, but we made it through the worst of it and felt as if we certainly could have finished the day.

Despite the somewhat miserable conditions and a few challenges the test run went really well and showed us that we’re ready for this trip. Sure there will be a lot of hard days ahead of us, but we can manage just fine.

I felt as though I had been cruelly pushed back 6 months. Back to when I had no idea what riding for extended periods of time was like, when riding 40 miles made my whole body ache. It seemed a little unfair. I didn’t train all those months simply to be back at the place I started.  I guess though, that when you add an extra 25 pounds (or possibly more) all at once, everything gets a whole lot more difficult. Then on day two, throw in some rain, near freezing temperatures, and an unwelcome visit from mother nature… I was about as miserable as I’ve ever been riding.

However, it is reassuring to know that we will never have days quite as bad as day two. We have rest days built in and we will ride longer days when it’s nice, giving us more flexibility when we need a day off. And really, after the coffee break Haegan mentioned (Folgers has never tasted so good), it really wasn’t all that bad. Here is what I have to add to my list of things I have learned:

– Hiking songs work for riding too

– Coffee actually does fix everything

– The worst will pass eventually