The ride into Skopje was long and difficult, and it did not help that I had just started to come down with whatever Autumn had just gotten over. The day after we arrived in Skopje and a good few after I was pretty under the weather. Shanti Hostel in Skopje was really cool, we liked it a lot. As soon as we arrived, soaked and exhausted, the host offered to do our laundry and dry it, and offered us some pasta he had just made. It made the end of the day a lot easier. While we were there a lot of Peace Corps people from all over the USA were in town for the weekend. It was cool to hear about their experience, especially since they have spent so much time in Macedonia. The next morning after breakfast we headed out on the walking tour of the city. We have been doing a lot of these free walking tours and they have usually been quite good. This one was cool as well but with a cold, the 3 hour length was a bit much for me.

I was exhausted and ready to relax by the end. We went to a little restaurant and got soup and kofte and Tavče gravče which was really good.

Afterwards we saw a little burrito place and, because they are one of the things we have really missed, decided to get a second lunch. It wasn’t quite a tex mex burrito but it wasn’t bad. Back at the hostel I spent the rest of the afternoon working on the bikes, they had a rough few days in the rain and needed some cleaning and attention. That evening we went out to a little bar with our new friends Eyrk and Ola from Poland.

It’s been great meeting new people at hostels and getting to hear about where they are from and the trips they are doing. We decided that we had to see Ohrid, Macedonia because everyone said it was great. The next morning we planned to take the bus there, stay a night and then another bus to Tirana, Albania before resuming by bike; the buses mostly because it was a bit out of the way and the roads weren’t supposed to be very good. In the morning, predictably enough, we managed to miss the first bus so we went back to the hostel and walked around the city a bit before catching the later bus. As we found out from one of the Peace Corps volunteers a day before, there is some superstition in Macedonia about the crosswind and cold, so buses tend not to have more than one window open. Our bus was really warm, which coupled with probably a slight fever didn’t make for the most pleasant trip. When we got to Ohrid we found that a German girl named Teresa was also coming from Skopje and looking for a hostel, we told her where we were staying and ended up meeting her again there. Once we got to Sunny Lake Hostel I took a little nap to try and fight off the cold and Autumn went to get soup fixings. She tried to go to the green market but it was mostly closed for the day and the one lady selling potatoes was trying to give her 15 potatoes when she only wanted 4 and didn’t see to understand. The kitchen at the hostel seemed to be the main room to congregate in. We met Tobi from Germany, Adam from Isreal, and Jake from Australia while we were cooking soup which we had enough of to share. By the time we were done with soup a few girls from Poland were teaching us all how to make perogi. Cooking and beer in a tiny crowded kitchen, it was a lot of fun. On our full day in Ohrid we wandered around the city along the water and to a few churches. Ohrid is truely gorgeous. The lake is incredible and surrounded by huge mountains on all sides. We went to a tiny church on a cliff with paintings dating back to the 13th century called Sveti Jovan Kaneo and from there walked up the hill to a slightly newer monastery, St. Clement and Panteleimon. 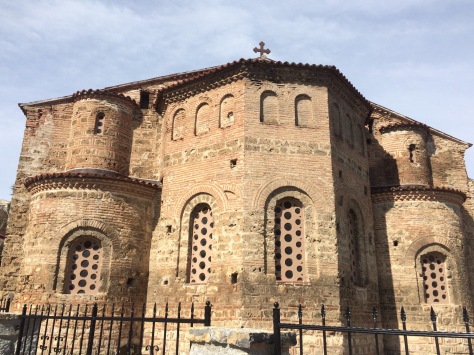 We checked out the green market which was now open and picked up some veggies for dinner. Most of the people at the hostel headed out that day so that night we hung out with Teresa and made buttermilk biscuits to show her some southern style cooking. She was a little shocked by how much butter we needed. We shared some biscuits with a few travelers while watching part of a Macedonian film called Before the Rain which gave us a bit of insight into the not so long ago conflicts in the region.

In the morning we took a short ride down the road to Struga to catch our bus. After having all the taxi drivers try to convince us we wouldn’t be able to take our bikes on the bus we got on the bus and rode to Tirana. It was a fairly long drive and again too hot on the bus. We didn’t get a stamp coming into Albania which was kind of a bummer. Along the way we also tried ˝”exotic” flavored Fanta which was pretty good. We arrived at The Tirana Backpackers Hostel by early afternoon. The hostel was really cool, lots of open space, orange trees growing in the backyard/bar area. And our friend Tobi from Ohrid was there and building a tree-house. We had some fresh oranges and I helped a bit with tree-house building before we headed out to see some of the city. One of the cool things we saw was this huge pyramid built by the last dictator of Albania and intended to become a museum about him, that is until democracy happened. It did make for a fun slide though and almost burned a hole right through my pants.

In the morning we wandered around he city some more and then went to the historical museum which was really cool. They had everything from prehistoric pottery and jewelry from the area all the way up to the fight for democracy in the 90’s. It was shocking to see the exhibit of the personal items of people gunned down trying to escape the country as recently as 25 years ago. Along the whole trip we have seen just how tumultuous the history of this area has been. A lot of these countries have changed dramatically even within my lifetime.

Then we just lazed around the hostel for a few hours. There was a group of french art students at the hostel collaborating with some local Albanian students to do an art installation and they were going to be having a bonfire. The bonfire didn’t end up happening but Autumn, Tobi, and I went over an hung out with them for a while. Afterwards we spent at least an hour gathering ingredients to make pancakes and in the process bought a half kilo of butter. We ate pancakes talked and drank cheap wine. Not a bad night.

One thought on “The Strug-a Bus”